With this economy...is a MUST!

With this economy...is a MUST!

If you've opened this article, you're probably a little smarter than most. You're taking an active step towards learning something different. If you want different, you have to think differently. Congratulations on that.

If you've been paying attention the past few years, a lot has changed economically. This isn't the time your parents grew up in. The days of getting a job right out of college and staying there until you retire are long gone. This is, of course, considering you do have a steady and secure job. Layoffs are definitely becoming a trend as companies try to stay afloat in these tough times. I read something that said the average person will have 12 different jobs before retirement age. What is that anyway? What is retirement age? It used to be 60, then went to 65, now it's what 70? Or work until you die? You may say this sounds harsh, but you can't say it sounds unfamiliar.

With this economy, diversification of your income is not an option.

I was talking about this the other day on twitter (@IamMEEK shameless plug) and a friend @RussRozay made a great point. Most people don't understand diversification and how it can help them. I've written about it before, but I'd like to explain it as simply as i know how..

I'm not that sharp, so I'll draw pictures. Cool? Cool..

Consider the examples below.. 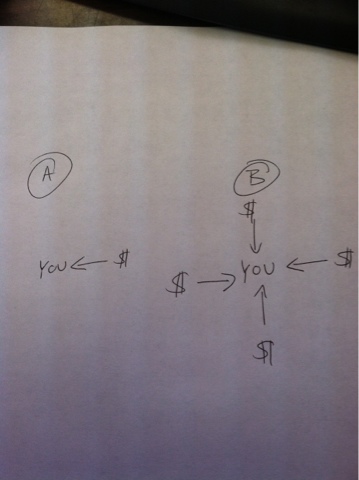 Which would you rather be? Example A? Or Example B?

Consider these questions before you answer..
(the dollar signs pointing to you are income streams)

1. If you're example A, and you don't control that income stream, what happens to your lifestyle if it's cut off?

2.If you're in control of the income in example A and it's cut off, what happens to your lifestyle?

3. Now, lets say you're example B. One of your income streams gets cut off, it may have an effect, but is that better or worse than a stream getting cut off in Example A? Which do you think would leave you in better position?

4. If you take one stream away from both examples which lifestyle, family, and or person is more devastated? Example A? or Example B?

5. Which example is more secure? While nothing can ever be totally secure,which example would you feel more comfortable being?

Same may disagree, but I think you'd rather be example B. Do you think 3 incomes are better than 2? Of course you do. Would you rather have 2 incomes than one? Of course you would. This is the basic premise behind diversifying income. If one source suffers or fails, another can pick up the slack while it recovers or is replaced.

I hope this helps. With this economy, diversification of your income is not an option. It's a MUST!

I care about you and want you to be protected I will not mince my words here. We live in unprecedented times. I take the mission of equal justice under law VERY seriously. Quite honestly, we all know I own and operate  ShopMEEK.com  but I do not do build this business for money.  While I do like the residual income it provides, I already have enough to take care of my bills. I don't say that to impress you, I say that to impress upon you that I'm more mission driven than commission driven.  I take this very seriously and hope you do as well. When I was in my early 20s, I had a black Cadillac...vogue tires...black rag top...gold pin stripe...chrome FACTORY wheels...wooo that thing was clean.  I'm from the Eastend of Richmond. I always wanted a Cadillac. I've owned about 10...However I got pulled over and profiled once a week. It got so bad I ended up considering selling my car. I could not keep what I earned and deserved because cops decided to pull me over
1 comment
Read more