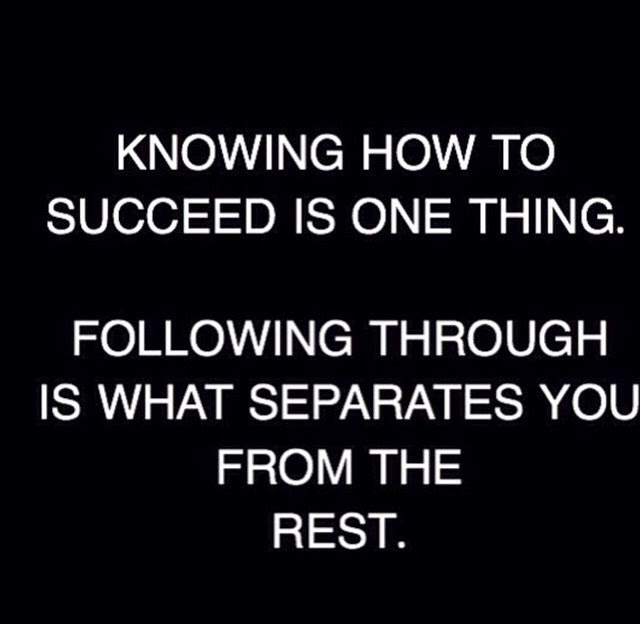 Knowing how to do something and actually doing it are two entirely separate subjects. Just as starting a venture is one thing but following through is a whole different animal.

Want to separate yourself from the pack? Finish!

Simply put, A lot of people start a lot of stuff, but a lot of people never finish! They don't complete.   If there was a graveyard for great ideas it would most certainly be full to capacity. I know this sounds simple, but becoming a finisher will separate you from the rest. Being able to stand firm in your convictions will make you stand out. There's an old saying that goes "the road to hell is paved with good intentions." Good intentions are awesome and everything, but you have to actually execute them to benefit. The person who thought well but never did anything rarely goes down in history. Nobody cares about the guy with the good idea, we care about the guy who manifested it! We've all heard the age old adage "Knowledge is power" but knowledge isn't worth a plug nickel if you're not willing to apply it. You have to be willing to finish!

If we ever want to win at anything big, we need action and staying power. Action is great, but we must repeat goal-oriented action until we get the results we desire. We have to be willing to be persistent. If great success was easy, everybody would be amazingly successful.  Some have quick success here and there, but those that enjoy quick success in a long-term fashion are few an far between.

What does this mean for us? It means we have to keep on keeping on. We have to follow through. If we don't follow through all the hard work...all the heartbreak...all the effort....are all for absolutely NOTHING..

He finished, and so can you.

Your's in the fight,

Whats your end game?  Are you, right now, where you thought you'd always be in life? Are you close to it?  You can’t change the past.  Think of all the hours at all your jobs. And that’s put you where you are today. Were you working on building a business of your own with residual income, a business you can sell or pass down, or were you trading your time for a paycheck?  Was it worth it? Are you getting what you set out for? It’s important that we all stop and think. Are we doing something that aligns with our end game. The sad thing is that most people don’t even have an end game because they never sat down to  think about and design their perfect life and how they’ll get there. Most people spend more time planning vacations than they do planning their futures! People say we should all dream again. Sure, dreams are good to have. But most people just become dreamers. The graveyards are full of dreams that were never lived, because they never cr
Post a Comment
Read more